The clinical picture of Arrhythmogenic Right Ventricular Cardiomyopathy (ARVC) was first described by Guy Fontaine in 1977. It is an autosomal-dominant hereditary disease and an important cause of sudden death, particularly in young people, although people from all age groups may be affected. Men are more commonly affected than women.

Symptoms
ARVC manifests through ventricular arrhythmias (VA) and ventricular tachycardias (VT) that mostly arise from the right ventricle (RV). Some VAs are asymptomatic and can only be detected by routine electrocardiography. Others, e.g. rapid sustained VT or ventricular fibrillation are diagnosed because of syncopes or survived sudden cardiac arrest. Patients with suspected ARVC should be evaluated by a thorough history, clinical examination, ECG, signal-averaged ECG (SAECG), 24h-ECG, stress testing and echocardiography.

The three most commonly involved regions of the right ventricle are also called the „triangle of dysplasia“ and constitute the right ventricular outflow tract (RVOT), the apex and the subtricuspid region. These regions typically show regional wall motion abnormalities and aneurysm (Fig. 1) that can be visualized through echocardiography, right ventricular angiography and cardiac magnetic resonance tomography (CMR). 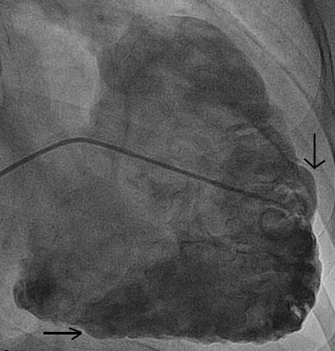 ARVC Registry
As often with rare diseases, pronounced and uncommon manifestations of ARVC are overrepresented in the medical literature. Unfortunately, there are only a few studies reporting data with a larger sample size over a long-term period. Hence, it is often difficult to give detailed and correct answers to treating physicians and affected patients.
We have established this national and international ARVC registry to follow a large patient population over a long-term period. Our goal is to answer important questions regarding diagnosis, risk stratification and treatment. We would appreciate participation of your ARVC patients in our registry and clinical studies.