Surgery may be indicated if patients suffer from advanced stages of atherosclerosis manifesting in severe recurrent episodes of angina attacks that do not respond significantly to medication treatment. There are two main surgical procedures for heart patients: angioplasty or bypass.


Angioplasty
Angioplasty is a procedure to treat a narrowed or obstructed blood vessel, typically as a result of atherosclerosis. Most common is the treatment of major arteries, specifically arteries supplying blood to the kidneys (renal artery angioplasty), legs (peripheral angioplasty), head (carotid angioplasty) and most importantly the heart (coronary angioplasty). Coronary angioplasty was developed by Andreas Gruentzig and was performed for the first time in 1977 at Zurich, Switzerland.

In a coronary angioplasty procedure, the surgeon first threads a narrow catheter (a tube) directly to the location where the blood vessel is obstructed (usually through the large artery in the thigh). Then, the surgeon passes a tightly folded balloon through the catheter into the narrowed location. The balloon is inflated to press the plaque against the walls of the artery, opening the narrowed location. To avoid loosened plaque fragments to be distributed to other parts of the body specialized suction devices may be used. After opening the constriction, the site of blockage is usually secured with an expandable metal mesh tube (stent) to prevent re-closure (restenosis) of the artery. 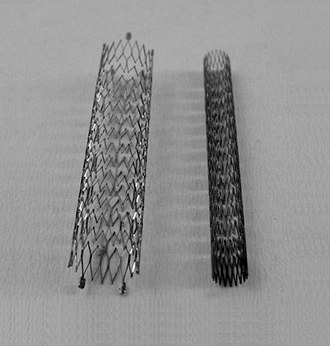 The advantage of angioplasty over bypass surgery is that angioplasty is less invasive and less expensive than bypass. Also, angioplasty is the preferred emergency procedure following a heart attack as survival rates are much higher as compared to patients treated with a bypass. The disadvantage of angioplasty is that blood vessels may close up again (restenosis) which requires additional operations. However, blood thinning drugs (e.g. Aspirin) and drug coated stents, prevent re-closure significantly. Radiation treatment, called coronary artery brachytherapy, is also sometimes used to retard re-closure of blood vessels by slowing down the cell growth in arteries.

In the bypass procedure, arteries or veins from elsewhere in the patient's body are taken to bypass atherosclerotic sections of the coronary arteries. The procedure is usually performed with the heart stopped, where the circulation of blood (the function of the heart) and the oxygen content of the body (function of the lung) are maintained with a mechanical device, often referred to as a heart-lung machine. Bypass operations can also be performed with the heart still beating, sometimes referred to as “off-pump” surgery. Off-pump surgery has been developed to reduce certain complications that may arise when a bypass is performed using a heart-lung machine. However, to this date, there is no evidence that off-pump bypass operations show a higher long-term survival rate. Nevertheless, off-pump surgery is the method of choice for some more complicated cases (i.e. patients with highly calcified aortas).


Heart Transplantation
If all medical interventions fail, a heart transplant procedure might be the only treatment left for patients with end-stage heart failure or severe coronary artery disease. However, due to organ shortages and the need for patients to remain on lifetime immunosuppressant medication to avoid organ rejection, heart transplant procedures are less common. Most transplant procedures are performed by taking a working heart from a recently deceased organ donor and implant it into the patient. Hearts from other species or implantation of man-made artificial hearts are also sometimes performed. However, these two procedures have been less successful in comparison to the use of human hearts. Post-operation survival time with transplanted human hearts averages now about 15 years.


Other Surgical and Non-Surgical Procedures

In addition to angioplasty and bypass procedures, a number of lesser invasive procedures (called minimally invasive procedures) are available for treating coronary artery disease. Some of these procedures are well established; others are experimental procedures that are only performed in a few medical centers for select candidates. Examples of other surgical procedures include atherectomy (minimally invasive method of removing plaque and blockage from an artery using a rotary cutter or other mechanical devices), myocardial laser revascularization (applying laser energy directly where blockage has occurred), and enhanced external counterpulsation (a noninvasive technique that uses pressurized cuffs to relieve angina).