The approach for managing any degree of cardiovascular disease revolves around the prevention and treatment of atherosclerosis. Prevention consists of a variety of medications and adopting healthier lifestyles, whereas treatment of advanced degrees of atherosclerosis includes surgery as well as medication. The choice of strategy managing cardiovascular disease has to be tailored to each individual patient, depending on severity and individual conditions.

The term heart disease relates to a variety of different afflictions associated with the heart. Such afflictions include diseases affecting the blood vessels that supply the heart, deterioration of the function of the heart, inflammation of the heart muscle or diseases related to one or more heart valves. Far the most common type of heart disease is called atherosclerosis, a number of conditions in which an artery wall thickens due to a buildup of materials. The most severe manifestation of atherosclerosis is the stroke and the heart attack.


The Process of Atherosclerosis

The process of atherosclerosis is very complex. It is hypothesized that atherosclerosis results from an interaction between cholesterol, oxidation (a chemical process) and the inflammatory response.

The trouble begins when LDLs carrying cholesterol (the “bad cholesterol”) get damaged by a chemical process called oxidation. Although oxidation is a naturally occurring process, under certain conditions, such as exposure to cigarette smoke or other environmental stresses, excessive oxidation will damage a disproportioned amount of bio-molecules, including the lipoproteins. As a result, the immune system initiates an inflammatory response targeting the damaged proteins.

During an inflammatory response white blood cells (in particularly those called macrophages) will be recruited to digest foreign or damaged molecules, in this case damaged LDLs carrying cholesterol. Unfortunately, the digestion process converts the LDLs into a foamy substance that readily attaches to the inner cell layer of arteries. As time passes, the foamy substance dries and forms a hard plaque causing a narrowing of the artery.

A second negative effect of the plaque buildup is that the innermost cell layer of the blood vessels fails to produce enough nitric oxide, a molecule crucial for maintaining the elasticity of blood vessels. As a result artery walls become brittle and prone to ruptures. 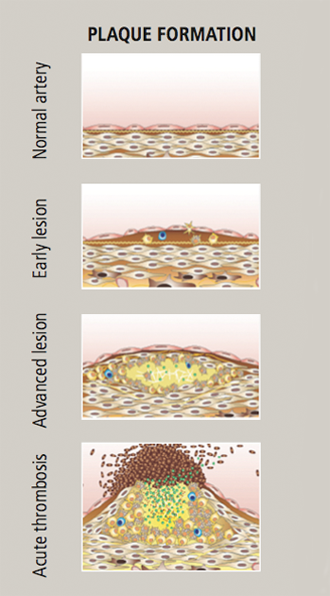 The plaque buildup causes a narrowing of the arteries, which may lead to permanent injury or may cause a heart attack.


As the degree of atherosclerosis increases two potentially life-threatening conditions are developing. First, the plaque buildup causes a narrowing of the arteries, reducing blood flow to the heart muscle tissue. As a result, some heart muscle cells are deprived of sufficient oxygen and nutrients, which may lead to permanent injury or may cause a heart attack. At the same time, the narrowing of the arteries causes the blood pressure to rise, increasing the risk of hemorrhages (bleedings) in small arteries. If the hemorrhage occurs in the brain it may lead to a stroke.

A second effect of the plaque buildup is a decrease in elasticity of the artery walls. Together with the elevated blood pressure such arteries suffer an increased risk of rupturing, and blood clots formed as natural defense against such ruptures may reduce or even entirely block the blood flow to the heart. Such an event may also lead to a heart attack. Sometimes, such blood clots become dislodged and obstruct a blood vessel in another part of the body. If the obstruction occurs in the brain, the consequence may be a stroke.