Already in Ancient Egypt, the heart was attributed an enormous significance. The heart was not only considered to be the seat of emotion and thought, but also regarded as the most important part of the soul. It was believed that at death the heart was weighed against the Feather of Truth, symbolizing the concept of truth, balance, law, morality, and justice. If a heart was deemed unworthy it was devoured by the goddess Ammit and its owner condemned to remain in Duat, the Egyptian underworld. Apart from the metaphysical attributes of the heart, modern historians suspect that the Ancient Egyptians knew little about the physiological function of the heart.

The first reference to the function of the heart and the circulatory system is found in a Greek text dating to the 2nd century AD. The Greek physician Galenos gave a detailed description of the blood vessels and even distinguished between venous and arterial blood, each with their own functions. He recognized correctly that arterial blood gave “vitality” by containing “air”, but he also believed that the blood was created within the heart and liver. In his view the heart did not function as the driving force for the circulatory system, but that the blood was moved by the pulsation of the arteries. 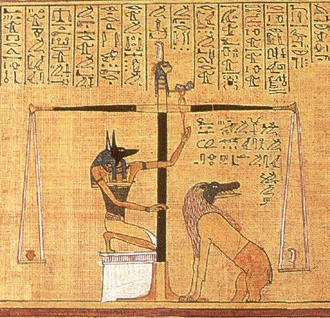 The first precise description of the heart is attributed to the medieval Arab polymath Ibn Al-Nafis in 1370 AD. He is now recognized for being the first physician to describe the pulmonary circulation of blood. However, Ibn Al-Nafis did not recognize all the exact details of the circulatory system. It took another 250 years to detail the correct properties of the blood and the heart as central driving force for blood circulation. This feat was accomplished by the English physician William Harvey (1578 –1657).