Most animals in the animal kingdom possess some sort of pump organ to move the blood (or the equivalent thereof) through the body by repeated, rhythmic contractions. However, the structures of the hearts show considerable variations among the different branches of the animal kingdom. A worm or mollusk heart is a relatively simple organ when compared to the hearts of vertebrates. Even within the vertebrates, the heart is increasingly more complex as one moves along the evolutionary ladder. For example, fish possess a two-chambered heart, amphibians possess a three-chambered heart, and birds and mammals possess a four-chambered heart.

In mammals, the right side of the heart is responsible for collecting the “used”, de-oxygenated blood from the body. The blood enters from the body into the top chamber (atrium) where it is passed via the lower right chamber (ventricle) into the lungs to be oxygenated. The left side of the heart then collects the oxygenated blood from the lungs in the left atrium. From there the blood moves down to the left ventricle, from where it is pumped to the body.

There are four major valves within the heart that maintain the unidirectional flow of blood by opening and closing depending on the difference in pressure on each side. There is a valve between the two chambers (between the atria and the ventricles) and there are valves in the arteries leaving the heart. 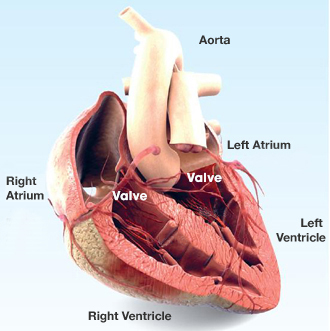 Anatomy of the human heart

On average, the human heart beats about 72 times per minute, amounting to approximately 2.6 billion times during a lifetime of 70 years. It weighs on average 250 g to 300 g in females and 300 g to 350 g in males. With each beat, the heart pumps about 0.6 deciliters to 0.9 deciliters of blood, amounting to 320 liters per hour or 7700 liters per day. Over a lifetime of a human (70 years) the heart will have displaced close to 200’000 metric tons of blood.