Cardiovascular disease is one of the most common form of sickness and cause of death in industrialized nations. Although the term cardiovascular disease can be used to describe any disease affecting the cardiovascular system, it is commonly referred to as a number of conditions of specific diseases in which an artery wall thickens as the result of a build-up of fatty materials. These conditions are termed atherosclerosis in the medical profession. Most feared among the inflictions caused by atherosclerosis are the stroke (disturbance in the blood supply to the brain) and the heart attack (disturbance in the blood supply to the heart).

Many of the mechanisms that lead to atherosclerosis are known. It is established that atherosclerosis begins with small damages to the innermost cell layer of the artery. Because of the damage fats, cholesterol, platelets, and other substances are deposited in the artery wall. Eventually, the artery becomes inflamed forming a hard cover over the affected area. This hard cover is what causes a narrowing of the artery, reducing the blood flow and increasing blood pressure. At the same time, the artery wall becomes brittle which increases the chance of fissures and raptures of the artery. Such raptures cause blood clots that can further clog the artery, leading under the worse case scenario to a stroke or a heart attack. 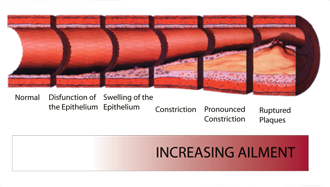 A stroke is a loss of brain function(s) due to the disruption of the blood supply to the brain. Two main types of stroke are distinguished: the ischemic stroke and the hemorrhagic stroke.

Hemorrhagic strokes occur when an artery in the brain ruptures, flooding the surrounding tissue with blood. The bleeding (hemorrhages) most often results when chronic high blood pressure weakens a small artery, causing it to burst. 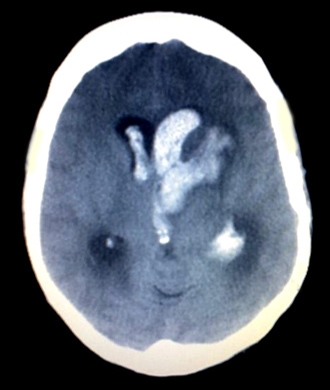 The accumulated blood from the burst blood vessels may also put pressure on the surrounding brain tissue and interfere with brain function, depending on the amount of pressure. In hemorrhagic strokes, bleeding may occur either within the brain (intracerebral hemorrhage) or may occur between the inner and middle layer of tissue covering the brain (subarachnoid hemorrhage).

A heart attack occurs when the blood supply to the heart muscle is severely reduced or even entirely eliminated. This reduction of the blood flow occurs when one or more of the coronary arteries, the main arteries that deliver oxygen-rich blood to muscle tissue of the heart, are blocked. This is usually caused by the buildup of plaque (deposits of fat-like substances) within the coronary arteries, termed atherosclerosis.

The buildup causes a narrowing of the artery, but more importantly the plaques lead to a hardening of the artery wall, which becomes prone to ruptures. If the plaque afflicted part of the artery ruptures a blood clot will form as a natural defense against blood loss of damaged blood vessel. However such blood clots often clog the artery reducing thereby the vital blood flow to the heart. This reduction or even cessation of blood flow may lead to a heart attack, termed myocardial infarction. 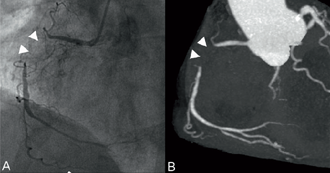 Stenosis (an abnormal narrowing of a blood vessel) of the right coronary artery.

If the blood supply is suspended for more than a few minutes, muscle cells suffer permanent injury and die. This can kill or disable a person, depending on how much heart muscle is damaged.

Sometimes a coronary artery temporarily contracts or goes into spasms. As a result, the artery narrows and the blood flow to the heart decreases or is even entirely interrupted. If the spasms are severe it will lead to a heart attack. The reason for severe spasms to occur is not yet fully understood, as such incidences occur also in people with normal-appearing blood vessels.

Heart valves can be afflicted by several diseases resulting in either a backflow of the blood that occurs when a valve does not close tightly, or when valves lack an opening for blood to pass through. Diseases associated with the malfunctioning of the heart valves can be either developed before birth or acquired later in life. A heart valve disease, which develops before birth, is called a congenital valve disease.

Cardiac arrhythmias are disorders in which the heart exhibits abnormal electrical activity. Such disorders manifest in the heart beating too fast or too slow, or might manifest in irregular heartbeat rhythms. Arrhythmias occur also in healthy hearts and are of minimal consequence. In other cases, arrhythmias may indicate a serious problem that leads to heart disease, stroke or sudden cardiac arrest.

Heart rates that are too slow (less than 60 beats/min.) are termed bradycardia. Bradycardias often result from irregular electrical activity of the sinus node, the natural pacemaker tissue of the heart. The sinus node signal can be either too slow, termed sinus bradycardia, or temporary paused (sinus arrest). Other bradycardias are related to the lack of proper electrical signal transmission from the atria (top heart chambers) to the ventricles (bottom heart chambers).

Heart rates that are too fast (more than 100 beats/min. resting pulse) are termed tachycardia. There are many different reasons why heart rates might be accelerated, some are a normal response to physical exercise or emotional stress but others have their basis in abnormal impulses of heart cells.

There are three other abnormal electrical activities of the heart that do not directly relate to the heart rate itself, but manifest in a highly irregular heartbeat. These conditions are termed automaticity, re-entry and fibrillation.

Automaticity refers to a condition where cells other than the pacemaker cells trigger heartbeats. The resulting heart rhythms range from rhythms that remain normal but rapid to rhythms that are highly irregular. Re-entry arrhythmias occur when an electrical impulse is propagated in tight circles, rather than being propagated from one end of the heart to the other. Fibrillation refers to a condition where multiple groups of heart cells beat independently resulting in a chaotic contraction of the heart. Fibrillation can affect the atrium as well as the ventricle. Ventricular fibrillation is imminently life-threatening.